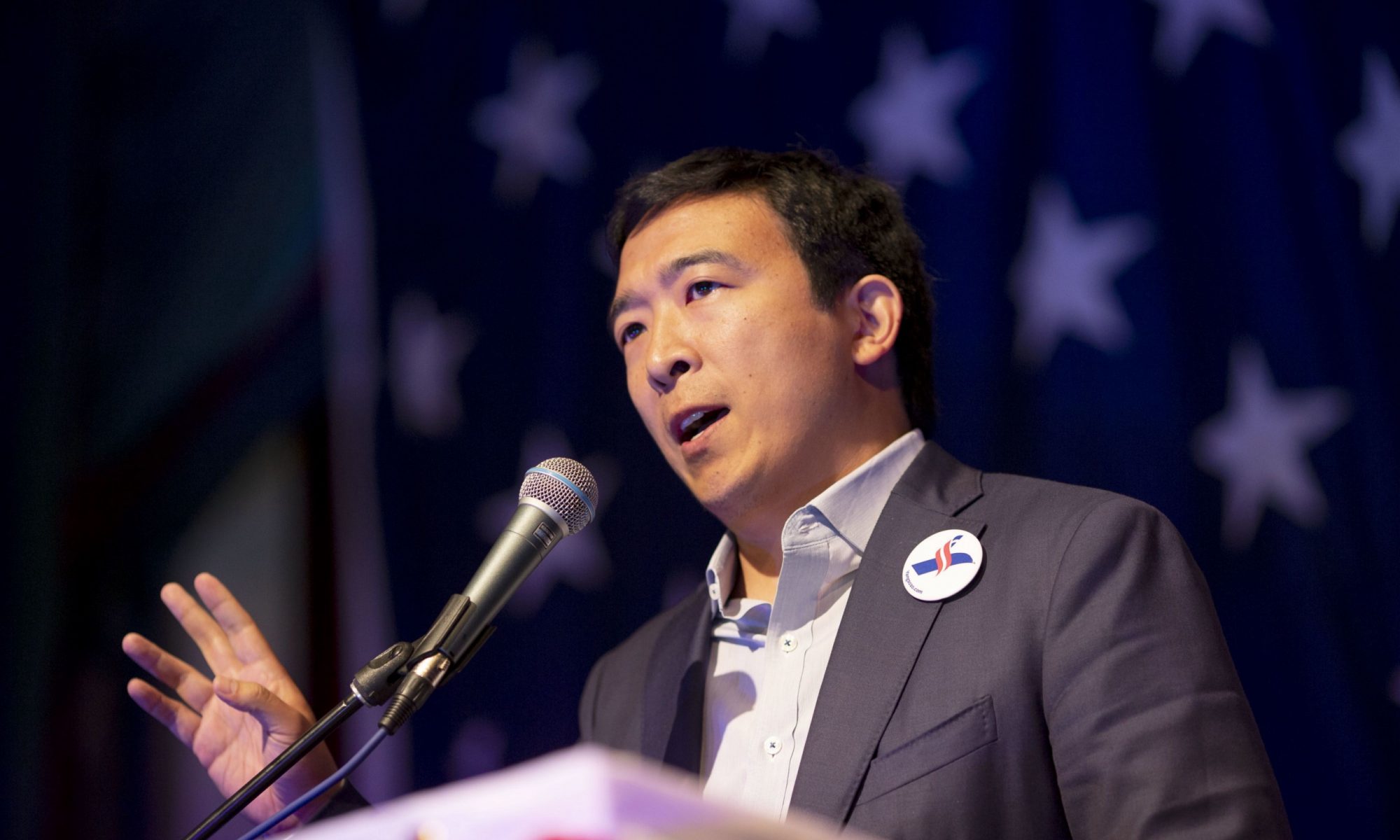 ust as I mentioned in my 2020 presidential candidates recap, I said there was a massive field of candidates that did not truly appeal to me. As an independent, there are just certain more liberal policies that I don’t know if I completely back, like the 70% marginal tax rate over $10 million. I don’t support a lot of the past voting records of many candidates that are at the forefront of the Democratic primary race. And most of all, I said that I am almost certain that anyone who isn’t white or a man could win the 2020 election in the climate we are in.

But, I think my opinion is slowly beginning to change.

I present to you Andrew Yang, an entrepreneur running from New York, for the 2020 Democratic nomination for President.

If you’ve been plugged into the race heavily, you’ve probably heard of Yang’s candidacy. And this week, in particular, he’s been receiving far more mainstream press, in part thanks to recent news that he is getting close to reaching the requirements to participate in the Democratic presidential debates in June. These are the requirements:

Currently, as of writing this blog post, Yang has met the second requirement and has approximately56,000 donations with over a month left to reach that threshold.

Irrespective of what you may know about his policy so far, he is about to make it into the debates, poised to compete with the likes of Sanders, Warren, and Harris. Also, fun fact, he was a part of the US National Debate team in 1992, so June should be an interesting time!

The single most important priority for me to finding a presidential candidate is finding someone who executes on policy and one who has the genuine interest of ALL Americans. That means the undocumented student brought here with their parents, the truck driver who will lose his job due to automation, the mother who lost her young black son because a police officer thought he had a gun. All of these people are dealing with their own personal burdens, and I want a president who is working their hardest to try and always put a policy in place to help all of these kinds of people.

What Andrew Yang so far presents to me is a campaign focused directly on policy. He doesn’t want to make judgments based on his background; he wants you to learn and understand his policy and decide for yourself if it is something you may agree with. That alone is something I see him working so much more powerfully at than any other candidate so far. He is cognizant of all the social movements in the country and is pushing to educate citizens on policies that can address injustice in America rather than just talking.

The policy of his that has been getting the most controversial response is his Freedom Dividend, aka universal basic income (the name of his policy according to him tests far better in test groups). Every single American adult, starting at 18 years old, irrespective of income level, will receive $1000 cash, without any strings attached, every single month for the rest of their lives. This policy, if just taken at the surface level will cost upwards of $3 trillion every single year, which he claims will come from a stronger tax code against the extremely rich corporations in this country that currently pay nothing in tax every year. He is proposing that if you are already receiving $1000 or more in government support through other welfare programs, that money will not overlap. So, as he gave as an example, if someone were receiving $700 in food stamps, they would be entitled to $300, and so on. Now, I don’t really understand how this will be completely paid for just yet when it comes to the specifics, but I’ll link you to his policy page and an interesting articleon why economist Milton Friedman supported UBI. It is not a new concept, but something interesting that we might see adopted by the other Democratic candidates.

Beyond this core campaign point, he has many other policies that, while are traditional liberal campaign points, I am all in favor for. He is, like many, in favor of completely removing the privatization of prisons and getting rid of mandatory minimum sentences that are as egregious as they are today. Something I found powerful that he claimed he would do is that if elected, on April 20th, 2021, he wants to pardon every single American incarcerated for a non-violent marijuana conviction and get them out of prison. He also is running with his own personal tech entrepreneur experience. That means that aside from his UBI policy, he is mainly working to address the fact that a majority of the jobs paying less than $20 an hour will be gone due to automation. That’s the crux of the jobs situation in America that I will reiterate again and again. Automation, not immigration, is responsible for the jobs crisis we are about to enter, and he appears to be focused in on a transition agenda dedicated to educating the workforce to be more prepared for this shift in the jobs market.

There is one thing that you’ve probably gone through this article thinking: what is Yang’s legislative experience? What state was he a senator, mayor, governor, or house rep for? The answer? None. He has no prior experience as an elected official. And to be honest, I am also really hung up on the issue. I want a president who knows the legislative process, who has been able to pass policies and been well-versed in the implementation of laws.

But what if that isn’t what I want?

What if I want someone who is educated in how the law works, understands their policy, and most of all, truly have the best interest of the American people at heart? I’m sort of at a junction point where I feel like we as a society may be treating those things as being traits that only currently elected officials to have in becoming our president. But what if someone, who may, in fact, possess all of these goals, is not a senator? Does that mean we shouldn’t vote for them if their policy is what we want?

Donald Trump also did not have elected office experience when running, but does he have a fraction of the understanding of the law that a lawyer who has worked for the working class for decades has? No. Yang is the opposite of Trump in almost every single way except for this one factor.

So, I’m not sure whether I really do like and support everything that Andrew Yang says or has proposed in his race. But after announcing in February of 2018, and with the fervor that he has shown so far, he currently is the candidate I dislike the least. And that is a start.

Andrew Yang, although it may be the greatest long shot almost any candidate this year, still has a chance to possibly become President of the United States.

Remember the last person we thought had no chance when they announced?I heard he became the leader of the free world.

Being Noah Tesfaye #71: Andrew Yang Could Be the One