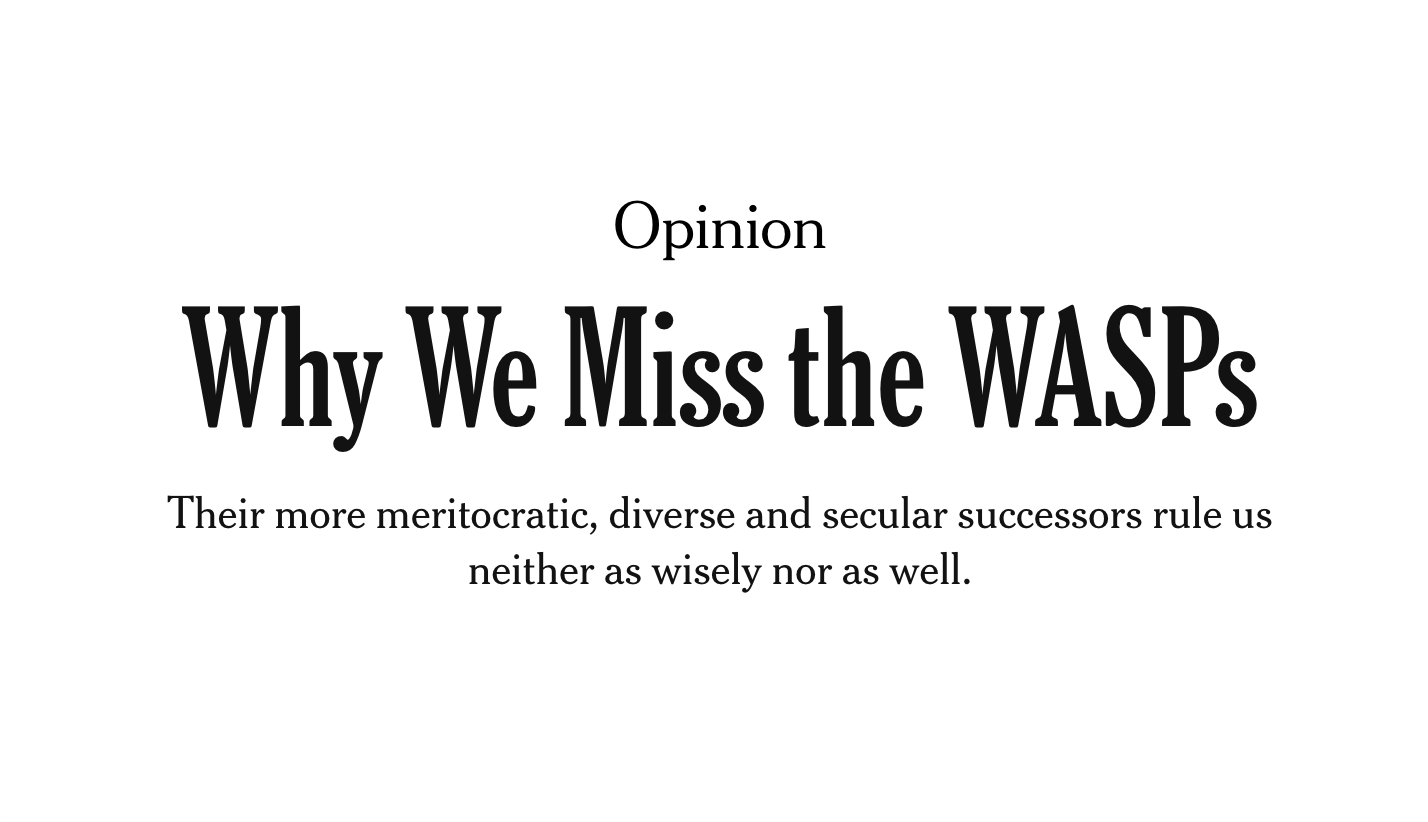 As a journalist, I believe that all opinions, no matter how ridiculous, hypocritical, or unnecessary, should be heard. Do you want to know how people are feeling in a certain area? Read their opinions section online or in their physical paper.

On Wednesday, I was casually browsing Twitter, looking through the news, and then I read, quite possibly, one of the most stupid articles I have ever seen:

“Why We Miss the WASPs”

If there ever was a more eloquent explanation for MAGA, filled with its idiocy, racist, and elitist justifications, this would be it.

I, just like everyone, will say that I am sending my good wishes to the Bush family after the passing of former President George H.W. Bush. But, journalistically, this opinion fails to address so many counterarguments, and it does so with such a lack of logic that I’m so glad it was published. This pushes to the very root of the political tension that exists in America today: some just don’t want to let go of the past.

The argument Douthat attempts to make is that the current establishment in charge of our country’s powers, whether politically or socially, is not seen as legitimate anymore and “we” therefore miss WASPs because our more meritocratic and diverse leaders are doing a bad job.

Is that even remotely true? Isn’t the country still vastly run by WASPs as is? He is right in saying that a meritocracy doesn’t exist, but was it ever heading further in that way? There’s a clear and unequivocal answer to that: no.

The nation was never designed from the very core of its founding to be a meritocracy; it was designed to ensure initially the more powerful, wealthy, land-owning White Anglo-Saxon Protestant men during the independence of this country would be able to retain their power. Women, black people, and religious minorities were never a part of the conversation. And even when laws systems have been put in place to ensure a more equal playing field, what happens? The Voting Rights Act gets repealed, and WASPs continue to benefit, leaving us with voter suppression across the country, most notably in Georgia.

He tries to use the SAT (something all us high school students know all too well) as an example to aid his argument, stating that this own meritocratic way of helping figure out how good students are is in itself bad because it results in an elitist higher education system. He’s right! But who created this system? WASPs, at the height of those so-called good times, the ones the MAGA dream is based in. You’re now complaining about a system that Asian students and other minorities are working incredibly hard to master, and now it is a problem for education? You are still significantly benefitting from this system, which you started, still to this day; look at the numbers. I’m not saying that testing isn’t important, but to make a case that the WASPs leadership could fix the issues surrounding how to make college admissions fairer and make affirmative action more effective just does not make sense if WASP leadership cannot admit to the fact they’re responsible for this climate.

What’s more, this article conveniently displaces many of the mistakes that H.W. Bush made himself in not even holding himself up to this WASP leadership morals Douthat claims we lost with his passing. Remember the Willie Horton ad? What about when he spoke out vehemently against the Civil Rights Act back in the 60s? One could argue he set in precedent the far-right direction of the GOP that we see today. To ignore these examples, along with others, is to once again not understand the fallacy in this argument itself.

The problem with Douthat’s logic is that he creates a clear false-equivalency. He conflates WASP leadership automatically with being decent. And by no means am I saying that many WASPs are decent because I’m sure they are. But decency, being an empathetic human being, is not some WASP-exclusive idea that only they can bring into leadership in government; it’s a characteristic that all people of all creeds can have and can develop. It’s a goal that all Americans, all humans need to share in order to become a more inclusive, successful society.

There have been thousands of great Americans who have had the “decency” that you claim is nearly exclusive to WASP leaders. Whether that’s Frederick Douglass, Cezar Chavez, Elizabeth Cady Stanton, or so many others, there have always been people who do not fit this WASP mold that still has instilled in millions the belief that they can be a part of this country and they should demand their rights as citizens to be honored. To ignore these leaders and fail to respect their own efforts to have this leadership style you so passionately wish we have today is to ignore history, to ignore how some women and men who aren’t of this ilk have done so much more than the WASPs you praise. The US is adapting, growing, diversifying to the world’s needs. A nation that hopes to thrive on making everyone more equal cannot do that with such a fixed mindset that is inconsistent with reality.

Today in this very country, we have a WASP-esque President, one from the creed that Douthat claims is responsible for this American caste system. Trump is from that ilk, but rather than being decent and inclusive, proclaims there is nothing wrong with white supremacists, that he is a nationalist. We have a leader and groups in this country that come from this very background that Douthat claims their values of decency need to count when in fact our president today emboldens carriers of the Confederate flag and praise Robert E. Lee.

What this country misses is leadership that is competent, that is well-versed in the law, that is willing to understand all kinds of people. I miss a well-read President, someone who does not shy away from confronting people he disagrees with. But these values are not WASP; they are human.

I do not miss WASPs leading our nation, whether for their physical presence or for the ideals Douthat apparently thinks they have over others because they still do have the power. What do I have instead? I have hope, hope that our nation can take steps that ensure that this system Douthat claims exist does not lead to a return of mostly WASP leadership, but what arrives is the opportunity where people of all walks of life, including some WASPs, that can rise up the ranks. I hope that this so-called caste system Douthat thinks exists does not require a return to what it once was but grow into something bigger. As Roland Martin has said, we want a nation where people from small state schools become US Circuit judges if they work hard, where more governors can come from community organizing.

If I may bring it closer to myself, I knew it would have only been a matter of time for an article like this would end up in the Times. It just makes sense that someone would have such calculated white supremacist views on America. You’ve got families exploring confederate memorials never understanding the horrors of slavery, and when they grow to wear Confederate flag clothing or post one of their flags on their front doors (“Monument Lies”), we are surprised.

What I’ve come to the conclusion of is that this article needs to be shared with everyone. We all need to read the logical fallacies that fuel these minds in order to learn how to best combat them. Once again, this isn’t a partisan issue either. I for one know how many liberal politicians come from this WASP heritage that takes advantage of every privilege and fail to support minorities for much more than their vote in a lot of cases.

White supremacy, no matter how eloquent or how it is used in memorializing people, is still white supremacy. It will thrive and will continue to thrive because it’s in America’s foundation. It will never completely go away. Douthat and many others will continue to attempt to convince us otherwise that what they preach isn’t just so, so read for yourself. I hope you’ll come to the same conclusion as I did.

Being Noah Tesfaye #58: I Don’t Miss the WASPs