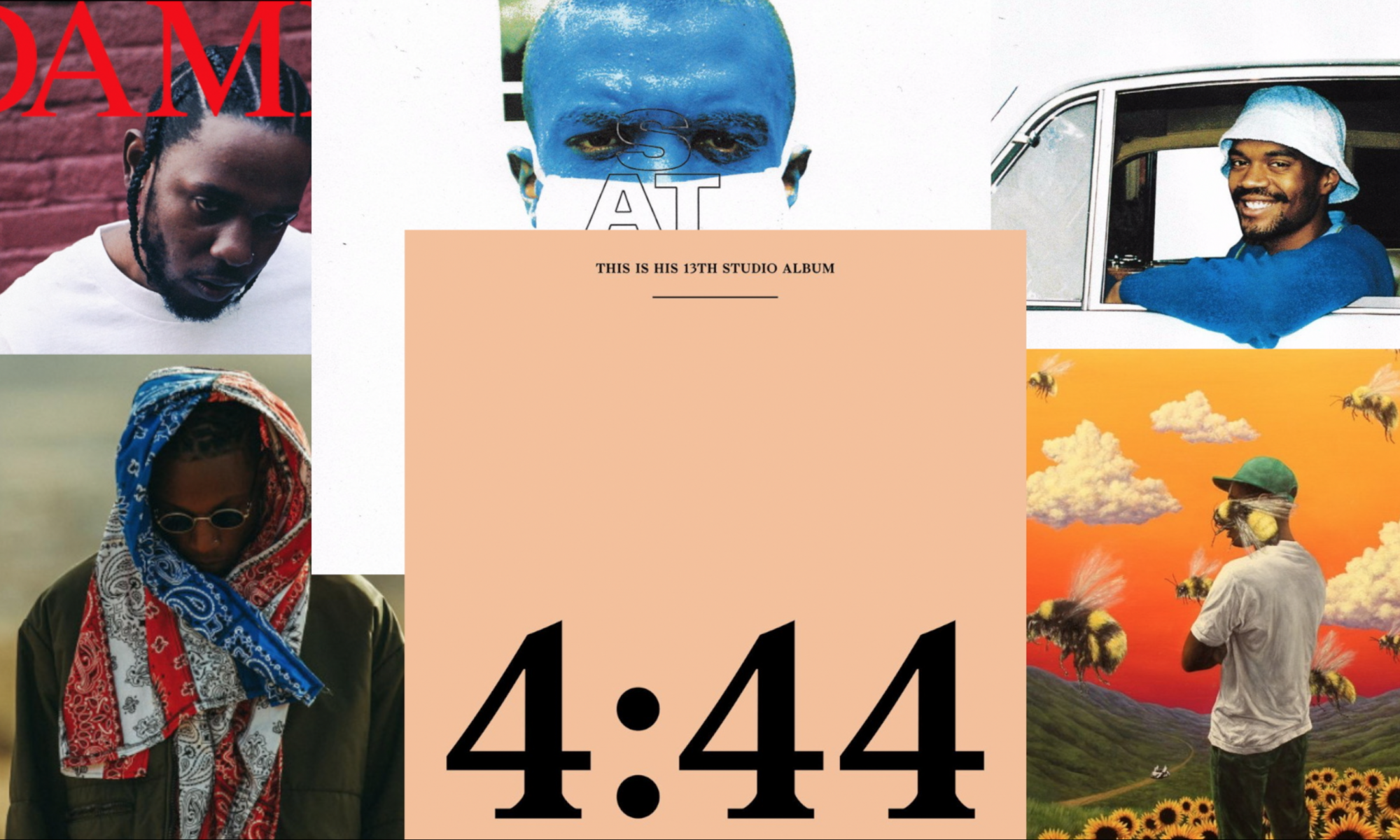 *The first two installments of this blog have been relatively serious topics, so I decided to write about something more light-hearted this week.

My fellow Americans… Oh never mind. I don’t want to think about him anymore. He was one amazing president. I’m here to talk about one simple thing: the State of Hip-Hop. Whether that’s rap, or any other category of hip-hop, I want to talk about my favorites this year and share my thoughts on the music that has released in one of the best years we have ever seen for my favorite genre.

I usually like to do a top five with my friends every few months. As of today, November 18th, 2017, these are my top five favorite albums of the year:

The first thing I would like to say before I explain everything about why this is my list thus far into the year is slots 1 & 2. The only reason why I put 4:44 above Flower Boy was because of what the album sentimentally means for me. The first time I listened to it was in my dorm at Columbia for a summer program, while my Russian roommate was watching YouTube videos. It was 12:01 AM and I started my trial for Tidal to listen to what Shawn had to say for the first time in four years. Those next two weeks with my friends were filled with analyzing the most random lyrics, contemplating how Beyoncé could forgive Jay, and more importantly, the Kanye beef. Other than those personal reasons, Tyler’s newest album would be at my number one spot with no hesitation.

Perhaps the one of the things I didn’t expect this year to find was that my favorite artist, Logic, failed to put out an incredible album. While I loved Everybody because I am a Logic fan, objectively, it was pretty lackluster. I wanted more in his message and I wanted the execution of his narrative to be flawless with how much this project was hyped up. I was disappointed to say the least.

That goes right to my criteria for listening to an album. The main component of an album I look for is narrative, and more importantly, an artist/character I can connect with. That’s why I loved 4:44. How much more personal could JAY-Z get than talking about the fact he admitted to an affair ON AN ALBUM?! He started the album right off with talking in third person, as if he wanted to “Kill JAY-Z.” Every single song on this album is produced to perfection, thanks to No I.D., and every single song tells a story. “The Story of OJ” shares a brief, yet punchy description of the African American struggle, and no matter what kind of black person you are, you are still a “nigga”(Side note: I don’t condone the usage of this word, but it deserves to be written here because it is a quote and reality that many black people, along with myself, face everyday). I don’t feel it necessary to break down the lyrics, as there’s Genius for that, but I do want to tell every single person should listen to 4:44 because it’s going to be a classic album one day.

I think this album also helps signal the shift in myself as a person. As I’ve been able to self-explore and learn more about who I am, I connect significantly more with those who have lived more and seen more in their lives. That doesn’t necessarily mean that I only like talking to adults, although I do prefer that at times, but I appreciate talking to people who have had profound experiences they can share. That’s why I LOVE BROCKHAMPTON. Thanks to my good friend Alexis for recommending them, but they exemplify this point. Each member has had different experiences and they do a tremendous job at eloquently sharing their stories. Kevin shares his experience about being gay. Ameer talks a lot about his life in the streets. Matt talks about abuse, and Dom shares his anxiety stories. Each one of them bring something unique to their albums and this ultimately leads to two, soon to be three, of my favorite albums of the year. If you want dive deep into this boyband/rap group/collective, I suggest listening to “FACE,” “FIGHT,” and “GOLD.” Each will give you a different vibe and a literal saturation of deep, emotional lyrics.

With the recent presidential election, I needed an album that could fire me up to know that this nation could be a place worth fighting to make better. No album energized me more to help find a cure for America than ALL-AMERIKKKAN BADA$$ (notice the spelling if you didn’t catch that;). I didn’t know what to expect from this album honestly. I didn’t know whether I would get an album of F Donald Trump, or a commercial album to help get Americans cope with the election. What you get is something worth so much more than I could have ever hoped. “TEMPTATION” is right up there as one of my favorite songs of the past five years with it’s infectious chorus and jazzy instrumental, and “BABYLON” could very well be the best rap song by Joey, and that’s including the Summer Knights and 1999. More than anything, this album is just fun to listen to and it give you a positive boost to your day in a fashion unlike anything I have ever listened to.

And now we come to perhaps the best album overall this year. I would be surprised if this album doesn’t win a Grammy, but knowing the people that nominate these albums, there is no way it stands a chance after all the antics this man has gotten into over the years. Flower Boy by Tyler, the Creator is the best album not for just its sonic brilliance, but for its ability to be the best album you can drive to. Period. I know that sounds ridiculous, but as someone who has just gotten his license, I do value the drivability (yes, I made this up) of an album to high regard now. The skits on this album help guide the listener on a journey of realization that Tyler, like anyone else, is really human. He is a man who has flaws, and can be angry, confused, and happy all at the same time. His features from Frank Ocean are placed at all the right moments in the album to soothe you. The soundstage created by this album is unlike anything I have heard in a rap album and every song feels as though you are in the studio with Tyler as he is recording. “See You Again,” the three minute masterpiece of this album, gathers synths and bumping 808s into the most harmonious melody of this project. “Boredom” brings the feature of Rex Orange County and Anna of the North into the catchiest chorus of the album, and its message is message is simple: “Find some time, find some time to do something.” I know I am not the only person who feels like Tyler wrote this album for just me. All these anecdotes, while seemingly personal, are all shared by people who struggle to find who we are, and when this album came out while I was in Ethiopia this past summer, I only came to appreciate life that much more.

Hip-hop is in a place that I have never been more proud to call myself a fan of. From the emergence of BROCKHAMPTON, to the return of Jigga, and the protest of Joey, hip-hop is now a genre I wholeheartedly can recommend to anyone, regardless of their music interests, because the messages of artists have never been so transparent for the masses to understand. I always get asked why I listen to so much rap music, and why I listen to so much explicit music. The answer I want to say is “No one ever liked Picasso until they came to appreciate him for what he created,” but I usually just say it’s my personal choice. I question America’s choice to not recognize hip-hop for so long as something we should appreciate. But there is a future for this, mainly thanks to the fact that hip-hop culture is now American culture. Today, SNL is going to be HOSTED, not a musical guest, by Chance the Rapper. Although the progress, I admit, is slow, rap music is the future of American culture, whether you like it or not. That’s why I admire people, like Gary Vaynerchuk, who never fears from embracing this culture. So if you have anytime to listen to any of these albums, especially if you don’t listen to rap that often, I encourage you to listen to any of these five albums in their entirety, in order. Maybe these projects can help open your mind to what this genre of music has to offer, and more importantly, why this genre deserves your ear for the years to come.